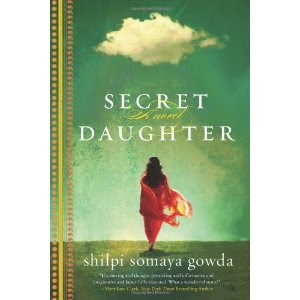 On the eve of the monsoons, in a remote Indian village, Kavita gives birth to a baby girl. But in a culture that favors sons, the only way for Kavita to save her newborn daughter's life is to give her away. It is a decision that will haunt her and her husband for the rest of their lives, even after the arrival of their cherished son.

Halfway around the globe, Somer, an American doctor, decides to adopt a child after making the wrenching discovery that she will never have one of her own. When she and her husband, Krishnan, see a photo of the baby with the gold-flecked eyes from a Mumbai orphanage, they are overwhelmed with emotion. Somer knows life will change with the adoption but is convinced that the love they already feel will overcome all obstacles. Interweaving the stories of Kavita, Somer, and the child that binds both of their destinies, Secret Daughter poignantly explores the emotional terrain of motherhood, loss, identity, and love, as witnessed through the lives of two families—one Indian, one American—and the child that indelibly connects them.(taken from back cover)
"Asha finds it difficult to keep up with Meena as she maneuvers the sidewalk, darting through its assorted population: men who spit carelessly on the ground, scrawny dogs without owner, children begging for change. And as hazardous as it is on the sidewalk, the roads seem infinitely worse: cars weave in and out of lanes and pay little attention to traffic signals, double-decker buses careen dangerously close to oblivious cows and goats. "There are one billion people living in India," Meena says, "and nearly ninety percent of them live outside major cities, that means small towns and villages..."
You can visit Shilpi Somaya Gowda's website here

Halfway to Each Other by Susan Pohlman 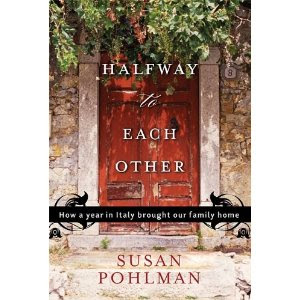 " Sometimes humans beg for battles to be taken away from them, not realizing that only in struggling with shadows is the Light made manifest."
W. Michael Gear

Halfway to Each Other follows the life of Susan and Tim as they and their two teenage children spend a year in Italy. Not knowing anyone in the country and not speaking much Italian, the family rebuilds their lives. This time though, they have to depend upon each other.
Instead of seeing each other for fleeting moments in the mornings and evenings, the family starts to spend their days together rediscovering the simple joys that bring texture and meaning to all our lives. Travel with them as they stumble upon new customs, explore medieval alleyways, browse street markets, befriend neighbors, learn to cook, and try a new language.... Amidst the chaos of daily life, we often forget to make time for each other. How wonderful would it be to just slow down and find out what's really important? (amazon review)
"Suddenly I had the deep sense that God was somehow involved in this as it went against all I knew to be safe and logical. This was one of those paths He wanted us to wander. Somewhere up ahead we would happen upon the treasure He was waiting for us to discover. I had lived long enough to know that the "treasure" often comes in packages one isn't expecting, and that treasure isn't necessarily monetary. Sometimes it is in a person to be met or a tough life lesson to be learned....
Sometimes this new guide to life is about good old-fashioned faith. When an unexpected opportunity or challenge lands in my lap, I now do my best to look at it with new eyes. Eyes that see possibility rather than the ones that used to see roadblocks and hazard warnings."
You can read more about Susan and her family's experience living in Italy over at her blog here
The descriptions in both of these books are detailed and exquisite as we journey with each family through the trials and challenges of life as they overcome obstacles. Each country comes alive, making me feel like I have travelled to India as well as to Italy. 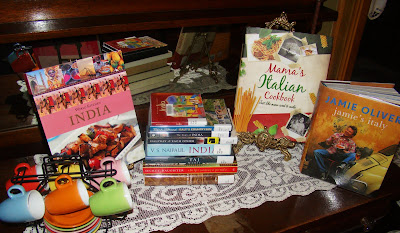